“The key to writing good code is to be able to express your intention using a constrained language, made to be understandable first by a compiler, second by a human being.

In this hands-on, we will explore the difficulties of expressing a meaningful intention using only a pen and paper, without words.

As a team, you’ll be in charge of drawing the manual for a given task, trying to express what to do and how to do it with a limited set of tools.

We will discover how these constraints lead the process and which tools can be used to go around these limitations and express the intention despite the limited expressiveness of the used language.”

This is the description of a hands-on I played at NewsCraft conference last week. This article aims at giving you the keys to be able to play this hands-on within your team and the key lessons that can be learned during the process.

The main point of this workshop is to make people think about one fundamental rule of writing: you only write to be read. And, in the case of coding, there are two categories of readers. The first, and for many, the only, is the compiler. You write code to serve a purpose and to execute a given task. You have to assert constraints for this code to be understood by the compiler, and ultimately the machine that will execute it. These constraints depend on the language you write in, but ultimately this creates constraints on what you can express towards the second category of readers:  other fellow developers.

When you think about it, you’ve got only a few tools to express your intentions when writing code, which are mainly the variables and functions names and the global organization of your code. What are the key elements you have to take into account when writing code for it to be clear and understandable, not only to a compiler, but also to other human beings? That’s what this workshop aims at highlighting.

The key conclusions you will reach (with some variations) are the following:

Participant are to be divided in teams of 3-5 people. Each team must have two sheets of paper (ideally, paperboard size) and one pen.

Each team is provided with a card containing an activity to draw. These activities must be obvious, everyday things. Here are some tried examples:

The workshop is held in three rounds.

Each team have 10 minutes to draw a manual for the provided activity. No words allowed (numbers are OK, but don’t tell them) is the only constraint.

Once the time is over, each drawing will be reviewed. Don’t mention the content of the card used. Let everyone guess. In the first round, the organizer throw (snarky) comments about the drawings at the teams, without letting them speak. Amongst the comment you can do, these one will almost always happen:

Pass each drawing to the next table. Ensure they have a second clean sheet of paper ready. Each team now have 10 minutes to refactor and improve the drawing they were provided, without knowing what was really written on the original card.

And time for another round of review, where you will start asking question to the audience, in order to switch toward a more participating review. Once again, here are some remarks that are almost guaranteed to be possible:

Once again, pass each drawing to the next table. This time, each team will have only 1 minute to make a single improvement. Then they will have to stand up and explain what this improvement is and why did they choose this one.

Encourage other team to voice their ideas, would have they chosen the same improvement?

Finally, for each drawing, have the team that made the initial draw give their opinion about the final result.

Since you took note of the discussions during all three rounds, you can now conclude, based on the remarks made by the participants. This is better if it takes the form of an open discussion between all participants.

Here are the three drawings produced during the Newscraft workshop, along with the original card: 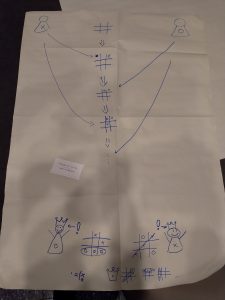 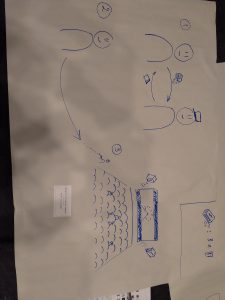 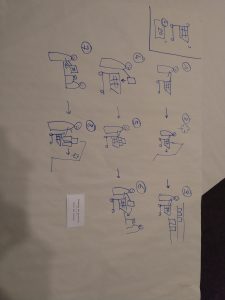