An Introduction to TypeScript

Developing a web application nowadays is almost impossible without JavaScript. There is no doubt about the dominance of this language and its community is one of the largest in the web development world, probably on account of its built-in flexibility. TypeScript does have certain limitations, however, when it comes to developing complex applications. You guessed it, today’s post will be all about TypeScript.

We’ll start by looking at what TypeScript is and then what features this language provides compared to JavaScript. Next, we’ll go through the various key concepts and, finally, the various pros and cons.

TypeScript is a programming language developed by Microsoft in 2012. Its main goal is to improve productivity when developing complex applications.

It is an open-source language developed as a JavaScript superset. This means that any code that is valid in JavaScript will also be valid in TypeScript.

The language introduces some optional functions as well, such as typing or object-oriented programming. No library is necessary to use these functions. Simply use the TypeScript compiler tool to transpile it (transform source code from one language into another language) into JavaScript. The executed code will be a JavaScript equivalent of the compiled TypeScript code.

How to Install and Configure TypeScript

There are two ways to install the tools needed for TypeScript:

Below is a valid JavaScript code in a TypeScript file identified with the .ts extension.

To run this program, we need to compile it first using the following command:

This generates a greeter.js file in the same folder as the greeter.ts file.

Then, you just need to reference the JavaScript file in the HTML page to run the program.

Congratulations, you just created your first application in TypeScript! But what makes it different from a JavaScript application? Nothing at this point! And that is one of the benefits of TypeScript.

The fact that TypeScript is a JavaScript superset means it can easily be partially integrated into a project that is already in JavaScript.

In this next section, we’ll be using one of TypeScript’s key features, static typing.

As you may already know, JavaScript is a strongly typed and dynamic language. The data type is not identified until runtime. This means that data types can change during runtime.

As the example above shows, throughout the program, the same variable can sometimes store a number, a character string, or even a function. This gives developers greater flexibility in how they develop their application. The downside of this flexibility, however, is that it can cause quite a few serious bugs if the data type is not properly controlled. After all, running the code is the only way of identifying the bugs.

TypeScript introduces slightly stronger typing than JavaScript. This typing is done through the addition of multiple basic types and static typing.

A language is said to use static typing when it checks variable types at compile time whereas a so-called dynamic typing language performs this check at runtime.

Typed variables are usually declared in TypeScript as follows:

In the example below, the first two variable declarations are explicitly typed variables and the last one is implicitly typed. Remember that with some IDEs, you can also identify your data type by simply hovering over the variable storing the data. This feature is extremely useful in large projects as long as the types are explicitly declared.

This is the method used by the TypeScript compiler to identify a variable type. When the compiler encounters the first occurrence of a variable, it tries to infer its type based on its use and then assumes that all other occurrences of that variable will have the same type.

The most basic type. You can declare this type in two ways:

TypeScript stores numbers as floating-point variables in the same way as JavaScript.

Binary and octal data is also declared, the number type. This has been supported since ECMAScript 2015.

In the same way as JavaScript again, the string variable type is declared as follows. You can also use single quotes, double quotes, and template strings with backticks (Alt+96).

If you try to use the greeter function with a number type parameter, you will see this error message during compilation.

Note that this is often returned on the fly by IDEs that support TypeScript.

Another subtlety in how JavaScript is replicated fully in TypeScript. The fact that this notion exists means you can declare an array of a specific type by adding brackets “[ ]” just after the type name. You can also use a generic write method, the Array generic type.

This type is unique. It is the type that is closest to JavaScript’s dynamic typing. You can assign any other data type to an any type variable.   This type is especially useful with third-party libraries when there is no declaration file and also for Ajax calls.

Often used to declare the return type of a function that does not return a value. Although a void type variable is perfectly possible, I haven’t yet used this type.

The enum type is quite a nice new feature. You can use it to make numerical data more legible and easier to understand. It avoids the need for magic numbers everywhere.

The first enum value is 0 by default but you can specify the value for each enum element.

Hover the cursor over the enum value to see its actual numerical value.

With strongly typed languages, you sometimes need to explicitly specify an object type. Enter casting. There are two possible syntaxes available in TypeScript. The first involves adding any between “<” and “>” before the desired type variable.

In the second, you add the keyword “as” followed by the desired type in front of the variable.

Take care not to overuse casting to “any” as it can quickly lead to the problems associated with the JavaScript type mentioned earlier.

Functions in TypeScript are written in almost the same way as in JavaScript using types. Let’s go back to the greeter function from earlier.

If the function has optional parameters, simply add a question mark after the parameter name.

You can achieve the same result using initialized parameters, which gives the following:

The interface provides a structure that allows you to define conditions (properties and/or methods) required for an object.

The example below shows how to use this with the greeter method which only takes objects that implement the “IPerson” interface as parameters.

If the object does not implement the interface, the compiler indicates the missing elements. The “lastname” property is not defined here.

To use the “invalidPerson” variable anyway, you can define the variable or change the interface to make the “lastname” property optional by adding a question mark after the variable name, as shown below.

The class is the notion that defines an object. It is one of the key concepts in object-oriented programming with interfaces. Interfaces are used in combination through structures called design patterns aimed at solving specific problems. Below is an example of class.

In this example, we defined a “Personnage” class. Use the keyword “this” to access class variables.

A module is what .NET would refer to as an assembly or namespace. It is a logical grouping of classes and interfaces that can be used to structure a project and make it easier to make changes.

Use the keyword “module” to declare the module. Below is an example of how to declare and use a simple module.

Module can declare classes as well as functions, constants, and interfaces.

These are the files that contain the set of method signatures for a library. Among other things, they can be used to assist auto-completion and, in particular, to quickly access a library’s full API. This means you no longer need to know the library API inside out.

Here, we want to use lodash and the associated declaration file in the application we are installing with the commands above. Note the version difference between the library and the declaration file. 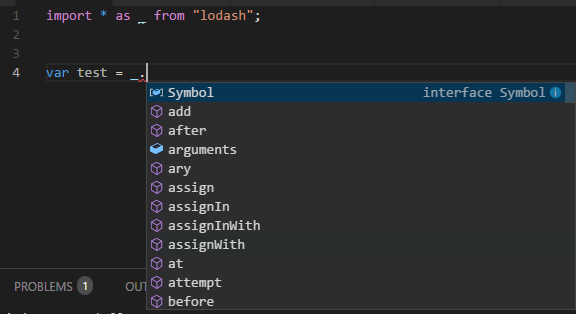 Similarly, you can start using TypeScript in a JavaScript project. Simply create TypeScript files in a separate folder and compile them in your deployment folder. If interactions between the files in TypeScript and JavaScript are necessary, consider using a specific type declaration file for the JavaScript code.

The simple example below shows a TypeScript code using a JavaScript legacy code. 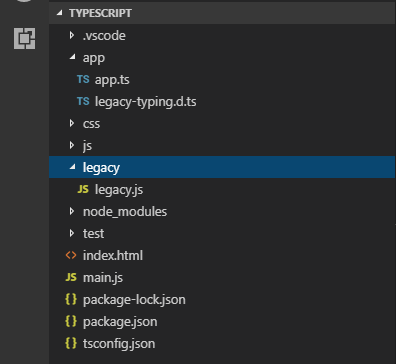 The first line references the declaration file that contains the LegacyGreeter definition.

Declare a module in which you define a correction interface with the elements you want to use for the legacy code. Next, declare a global variable of the same type as the interface defined in the module.

The legacy code to be called at runtime is set out above.

This method means that the TypeScript can change without modifying the JavaScript, resulting in a more controlled migration from JavaScript to TypeScript.

Pros and Cons of Using TypeScript

Read on for the pros and cons of using TypeScript in a project.

Save Time With TypeScript

TypeScript is a language that can cut development time by introducing object-oriented programming features. The compiler is a valuable tool for pinpointing errors fast as it shortens the time between writing the code and identifying any errors, mainly thanks to typing.

Note that transpiling TypeScript to JavaScript can reduce the barrier to using scripting languages for backend developers, delegates managing JavaScript’s subtleties to tools, and ensures control over cross-browser compatibility.

This posts should interest you
Event-driven architecture is an architecture model based on event management (registration, publication, consumption, etc.). It is classified as a distributed...
Read more
This blog post will look into Synapse Analytics data integration pipelines, so it can also be used as a reference...
Read more
Minimal APIs were released at the same time as .NET 6, C# 10, and a number of performance improvements. But...
Read more
In the latest version of ASP.NET Core 7, a new middleware is available for managing rate limits. What does it...
Read more
C# 11 will be released in November—at the same time as .NET 7—and like previous iterations, it will include a...
Read more
In an increasingly fast-paced world, a system’s or application’s ability to provide quick and consistent responses is critical in determining...
Read more
Comments
Leave a Reply Cancel reply