There are more and more platforms between the PC, the web, smartphones, and various connected objects within the application ecosystem. Offering a seamless, unified, and interconnected flow between all these devices is fast becoming the norm. Complexity, team size, and maintenance costs tend to rise when developing apps for multiple platforms. There is also an increased risk of too many variations between them.

To overcome these challenges and reach as many consumers as possible, hybridization technologies that enable the development of all these apps in a single and unified manner are gaining popularity. This is what we’ll be discussing in this latest installment of our series on hybridization.

The purpose of hybrid applications is to unify the entire application ecosystem. To get a clearer understanding, I think it is vital to take a step back and look at the big picture. What are the various application types? What do they provide and how do they help? How do hybrid and native applications differ?

Native apps are built to leverage the target platform’s tools (language, framework, software development kit (SDK)) and are often designed for a specific platform: Android, iOS, Windows, and Mac mainly. This means that each platform has its own dedicated language and development team. These applications often have to be installed via the respective app stores (Play Store, App Store, Microsoft Store, etc.).

However, there are some huge advantages to native apps:

As the name suggests, these are applications developed using web technologies to reach other platforms, such as desktop computers or smartphones.

Web applications also have some positives:

However, they are not without drawbacks: unlike native apps, they make it harder to use all the platform’s built-in features. Not all of them are available, they look the same on different platforms, and their performance is not always as good as it could be.

Now, back to hybrid apps. As its name suggests, this type of app takes features from both native and web applications. They are also called “multiplatform applications” because, unlike native applications and like web applications, they can target multiple platforms (mainly Android, iOS, Mac, and Windows) using the same source code. In the early days of hybrid apps, this source code only used web-based technologies. However, as we’ll see later in this post, this is starting to change. But hybrid apps must be installed on each platform, just like native apps.

Hybrid apps can be used as “WebView” containers for websites to deliver them across all platforms where the chosen technology can run. This is not recommended for performance and rendering, though.

Using the same logic, containers like “Electron” can also make web versions compatible with desktop computers. Popular apps like Slack and Figma use this.

Hybrid applications are highly appealing because they appear to combine the benefits of both web apps and native apps. Web apps have lower costs and faster development times because they use a single code and can target multiple platforms simultaneously. Native apps have the advantage of being installed on the device and having access to more advanced features.

So, let’s weigh up the pros and cons, starting with the pros of hybrid apps:

There are still some drawbacks:

Acutely aware of the problems that come with hybridization and its appeal, the associated technologies and frameworks are full of ideas to lessen the impact of any weaknesses while catering to as many platforms as possible and trying to speed up and facilitate development. Let’s take a closer look at two intriguing technologies.

Microsoft has extensive experience developing hybrid applications with its “Xamarin” and “Xamarin Forms” frameworks. .NET MAUI (multi-platform App UI) is the evolution of this integrated within the .NET 6 framework to take full advantage of its performance. 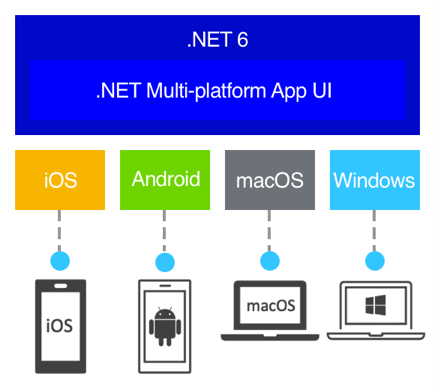 Blazor, on the other hand, is a Microsoft open source framework for C# website development using the.NET platform. It is executed either directly on the server or via WebAssembly (WASM) with an interpreted .NET Runtime.

A Blazor WASM website can already be turned into a hybrid desktop application using solutions like “Electron” that support WebAssembly but only for the desktop and with limited performance.

This is changing because .NET MAUI has a “BlazorWebView” component that lets you add Blazor pages to your MAUI applications. This means you can deploy your pages on browser and desktop, and on Android and iOS mobile devices!

In addition, this allows the linked Blazor pages to be executed directly in the MAUI .NET runtime, resulting in a significant performance boost. These pages can interact freely with all common code.

With .NET 7, Microsoft plans to make the connections between these two frameworks even stronger.

So, we have a solution that lets you either build hybrid apps from scratch that work on Android, iOS, MAC, and Windows or have your website turned into a hybrid app without sacrificing performance.

Kotlin is a language developed by Jetbrains. It is intended to replace Java in many scenarios. It is also Google’s preferred language for building native Android apps. Our “Is Kotlin the New Java?” post is an excellent place to start for further information about the language. 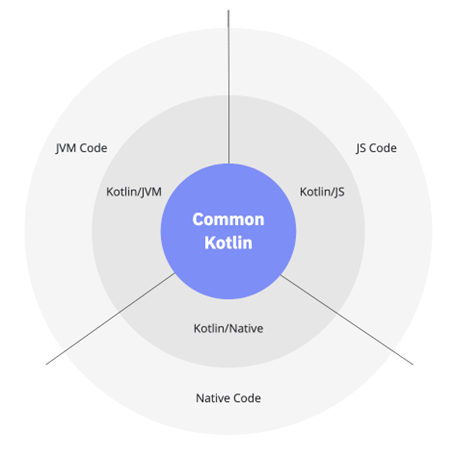 By using this collection of tools, developers can work on their chosen platform in a unified way while still fully exploiting the language’s potential.
This approach can also work in both directions. So, you can add Kotlin modules to existing applications on the target platform or add existing applications to Kotlin KMM projects.

This means you can start with a native Android Kotlin project and turn it into a hybrid app for iOS and the Web, for example.

The Pros and Cons of Hybrid Applications

The number of options is growing, there are different ways to do things, and the technologies that allow for hybridization are getting better and can be used on more and more platforms. Despite the growing attractiveness and strength of the offerings, however, hybridization is not yet an automatic choice for application development. As is often the case, weighing the pros and cons before deciding on a particular technology is essential!

For example, whether or not it’s a new project, what technology the organization has in-house, and budget are just some of the factors that come into play. But Cellenza is on hand to help: don’t hesitate to contact our experts!

Interested in learning more about hybridization? Read the other posts in this series now:

This posts should interest you
A Progressive Web App (PWA) is a web application rather than a mobile application. The main distinction is that a...
Read more
Unity is a game engine that combines an IDE (Integrated Development Environment) and a set of tools and services in...
Read more
Kotlin is an object-oriented and functional programming language primarily developed by JetBrains. Designed to be compiled for the Java virtual...
Read more
Post co-written by Madina Delleci and Rémi Eynard   .NET Multi-platform App UI (MAUI) is a multi-platform technology for developing...
Read more
Swift is the programming language launched by Apple. It can be used to develop iOS, Mac, Apple TV, and Apple...
Read more
Flutter is a Google-developed open source UI framework for creating native multi-platform applications. Flutter has evolved into a process, philosophy,...
Read more
Comments
Leave a Reply Cancel reply