Git Hub is a private or public source code repository that allows developers to host and share their code.

There may be an increased risk of so-called sensitive information that is unintentionally or unknowingly supplied to this platform being leaked. This may include API keys, identifying information, and other digital authentication strings.

According to a GitGuardian study, secrets in source code have seen a massive increase of around 50% since 2020.

Several large organizations have had security breaches due to leaks and the discovery of secrets in employee repositories.

Toyota recently reported that customers’ personal information may have been exposed after an access key had been made public in their repository for five years.

In addition, some projects use dependencies, leaving them open to vulnerabilities.

GitHub’s built-in features can secure secrets and code. Some capabilities are included in the basic package, while others require a GitHub Advanced Security license.

The table below outlines GitHub’s advanced security features for public and private projects.

The features can be enabled either at the repository or organizational level.

Some projects need to be connected to apps. For example, when using Terraform, you can use an app registration to perform a deployment. Unfortunately, if all the information from the app registration is included with the code, anyone with access to the repository can use this information to access Azure in this scenario.

Secret scanning is a feature that lets you scan repositories for tokens or authentication keys.

GitHub created a database that allows the tool to recognize the form of the IDs thanks to its collaboration with multiple providers (AWS, Azure, GCP, Databricks, Atlassian, etc.).

Example of the data that the vendors support: 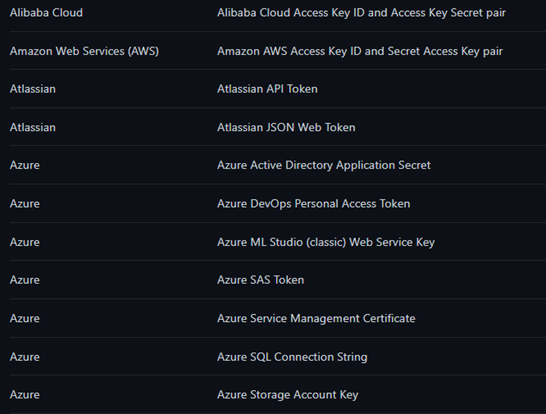 The scan is performed automatically on the entire Git history on all branches.

When GitHub detects a secret, it sends an email to the repository administrators, the organization owner, the author who pushed the code to GitHub, and the service provider that provided the secret.

When the provider is notified that a secret has been compromised, it can revoke it, generate a new secret, or contact the user.

Once the secret has been pushed to the repository, it must be considered compromised. The next step is to:

Push Protection has been added to GitHub Enterprise Server and Cloud Enterprise in beta. This option lets you check for secrets when you push the code. If a secret is found, the author is notified so they can remove it before it gets pushed to the repository.

The analysis can be performed regularly via a scheduled job or when a specific event occurs, such as when a developer pushes their code.

It lets you sort and prioritize fixes for problems in your code. It also prevents developers from making fresh mistakes.

The engine that does this is CodeQL, which GitHub developed.

There are two ways to use CodeQL:

Some projects depend on third-party applications, which can be a security risk if the dependencies have vulnerabilities.

GitHub provides tools that can help you find and fix vulnerabilities:

So, to prevent potential mistakes, it’s important to implement features that are easy to activate.

Would you like to learn more about cloud security? Don’t hesitate to contact our experts! You can also read the entire Cloud Security Month series of posts here:

This posts should interest you
Today we will show in this article how we could secure access to Swagger interfaces for ASP.NET Core applications with...
Read more
The Open Web Application Security Project (OWASP) and its Top 10 have long been associated with application, website, and API...
Read more
Working with Data in an AI or Machine Learning project raises several security questions that all companies should be able...
Read more
Co-written by Chéryl Chauvin & Alexandre Nikodem   Before you ask if you need cybersecurity training, you should understand precisely...
Read more
Cybersecurity is the featured topic at Cellenza this month. This subject is trending because most companies now realize its importance...
Read more
Today’s post aims to answer the following question: How do you delegate user and device management to regional administrators within...
Read more
Comments
Leave a Reply Cancel reply